100 years of the Territory

In 2022, the Department of the Territoire de Belfort celebrates its centenary. As the youngest department in France, the other departments have celebrated their 230th anniversary in 2020. The Territoire de Belfort will celebrate this anniversary with numerous events and festivities starting on 11 March. This is an opportunity for everyone to discover or rediscover the unique history of a multifaceted department and to let the Territory of the Lion shine beyond our borders. 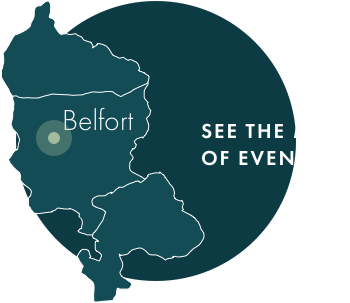 The name of the Territory brings to mind the Lion, its inseparable emblem, its industrial and military past, or its somewhat hidden location, somewhere on the outskirts of Bourgogne-Franche-Comté. Its title of smallest department in France could also make it seem monotonous or without particular interest. And yet, no other destination is able to represent, in such a little area, such a kaleidoscope of change and surprise. It is a sort of paradise of 610 km2 decorated with multiple waters, mountains, wide open spaces with forts, ramparts or bastions erected on the lines of a wild and steep geology.

How to get there ?

Territory of the Lion

Malsaucy, Territory of relaxation and nature

Go to the website of the Department of the Belfort Territory

This site is registered on wpml.org as a development site.